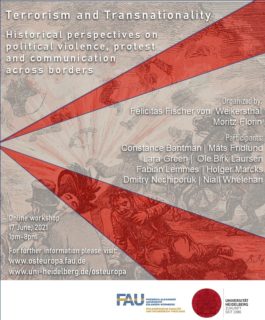 The online workshop brings together scholars from Western Europe and Russia working on the transnational history of political violence and terrorism during the late 19th and early 20th centuries. It aims to bring together the perspectives of scholars focusing on subject areas that are intertwined, but often analysed separately: The histories of acts of violence committed by self-declared anarchists, social revolutionaries, or anti-colonial activists. The workshop aims to identify overlaps, connections, and also crucial differences and dividing lines between various forms of political violence, protest and communication across borders.